skip to main | skip to sidebar

Thomas and I are engaged!

Gather 'round children, for a little story time...

We had planned to go to Jackson, MS for our homecoming, which consequently, was also on the same weekend as my birthday. So on our way to Jackson from Oxford, Thomas asks if, during the hulla balloo of alumni events and reuniting with friends, that we can have some alone time for birthday presents. Of course, I say, and we go our separate ways as soon as we park on Millsaps' campus. Later on in the afternoon, we get back together, and Thomas suggests that we do the gift giving at the old observatory on campus, which, some of you already know, is kind of special to us for it's location and it's lending itself to good metaphors. (that's another story).

Best birthday ever. My first gift: gummy bears! 2nd gift: a framed piece of paper that Thomas painted and fashioned to look like an ancient scroll, which turned out to look like this: 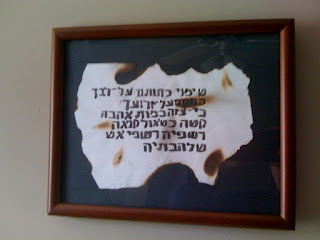 Very neat. So he tells me what it says and that it's from Song of Songs, the verse that begins "Set me as a seal upon your heart"---very touching. And if you look at it through squinted eyes, it kind of looks like the United States, but that's beside the point.

Then down he goes, and the rest is history. I couldn't have planned it to be better.

I can't actually wear the ring just yet, thanks to my larger-than-life knuckles. So next weekend I'm headed to Nashville to get the official jewelers of the Tennessee Titans (you didn't know I was so special! haha!) to get it re-sized. In the meantime, for you who are curious, here is a photo:

In this light, it looks gold, but it is actually white gold. I took the pictures with my iPhone, so not the best quality, but there will be plenty of time for that! If I may say, I think Thomas deserves kudos for picking out such a pretty thing! *applause*

We aren't quite sure yet when the nuptials will happen, but we have been telling people that the summer of 2011 looks most likely, and it will probably take place somewhere in Tennessee, but probably not Jackson.

It's so exciting! I'm happy to finally be able to share this with people! (I had to write a blasted paper this week, one that I just now finished, so I felt like it was about time!)
Posted by hamblha at 9:54 AM

She sho am crazy