skip to main | skip to sidebar

Updates on the school front

Sunday, Monday, and Tuesday of this week all consisted of a whirlwind of traveling, campus-visiting, and time with family and friend. (That's supposed to be singular, haha!)

Sunday, Mom and I made the 7 1/2 hour drive to Columbia, South Carolina, so I could visit the campus where gamecocks walked around and palm trees were in pots. It was a very pretty campus--the houses and buildings around reminded me of the seaside in Charleston: pastel colors, big windows, an older style of architecture. Like I said, the campus was beautiful, but of course, the humanities building was a big ugly cement structure, with slits for windows! (Don't feel bad, SC fans--it seems that almost every building with "Humanities" in the title is destined to look like a delapidated cement fortress.) Regardless of its seemingly drab appearances, the program was awesome. I also got to visit briefly with Danielle, which was so much fun!

Monday night after the visit, Mom and I then drove to Knoxville (a measley 4 hours northwest of Columbia) and met Mark and his lovely gf for some late supper. Because I didn't think we would be driving in until Tuesday morning, all of my appointments with UT were in the afternoon, so we all were able to sleep in! (ahhhhhhh). So around 2:00, I visited the bustling campus and another sand-colored cement building (which actually had nice sized windows...) for a few chats with faculty and grad students. UT also has a great program, so this will make my decision for the fall even more thought out.

Mom and I made the drive back to Nashville Tuesday night, and this weekend's itinery will be about the same as last's: visit two programs and ask lots of questions. Only this time, the programs are on the same campus! (I found out this past Saturday that I was admitted into the Center for the Studies of Southern Culture program at Ole Miss! yay!)

I will also be visiting friends in Jackson at Thomas' fraternity's alumni event, and I am looking forward to that immensely. See y'all in Mississipp-ay!
Posted by hamblha at 9:44 AM No comments:

This should be the first of several posts to come about my 'hood: East Nashville. For the the out-of-towners, "East Nasty" is Nashville's famed district of hippies, new age junkies, baristas, and granolas (I use all of those words with the utmost compassion and respect, you commies). And it's been my sweet little home for the past 8 months! It's also infamous for being one of the poorest parts of town, unfortunately. But to lighten the mood, I've decided to post pictures of the house/neighborhood. I've been meaning to take more pictures to sort of photo-journal my time here, and so here are some of them!

This is a window in the kitchen that overlooks the back yard. It's about 7:00am here, and St. Patrick's Day. 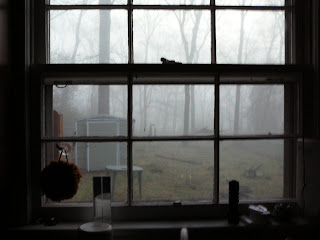 I promise that it looks better when the living dead aren't coming out of some eerie fog. 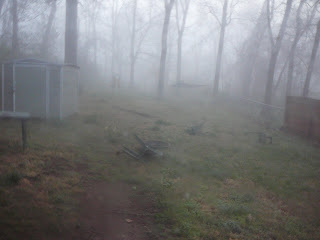 Here is a nicer view of the neighborhood. Daffodils have been popping up like weeds around here! So I took a snapshot, or two, or... 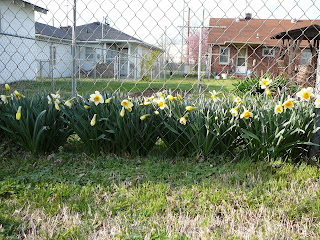 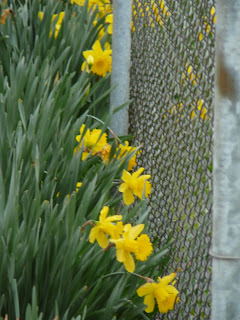 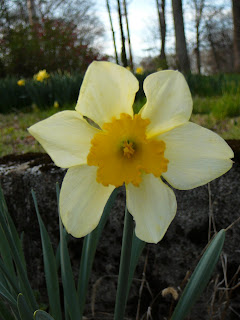 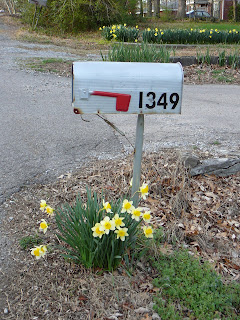 While taking Bodhi for a walk, I stomped all over these little people! 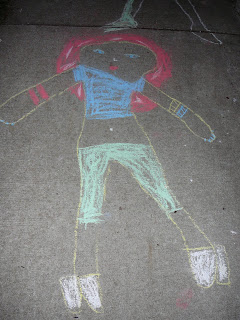 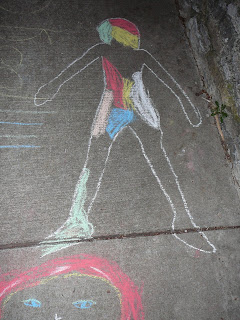 If this drawing on the left represents how this little girl (I hope that's a correct assumption) sees her self-image, then that is a pretty cool little girl, I say. However, I cannot speak the same about the one on the right. This teeny bopper has been watching too much Britney Spears on MTV. This photo is just hilarious. I don't even know what to call that. I'll start with no-neck Nancy.

A heart with 2 strands of hair framing it: 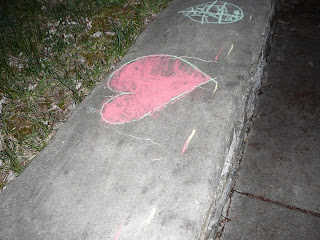 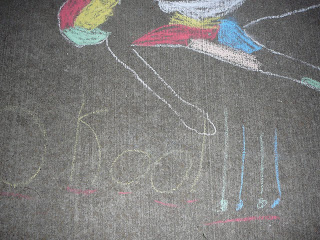 Remember when you used to spell "cool" with a "k?"


Hopefully I'll photo some more "kool" findings soon. Also--sorry about the weird formatting just now--that was unavoidable. I have to make a decision on grad schools tomorrow. Keep posted to see where I'm going next semester!

Lovingly,
HAH
Posted by hamblha at 4:43 PM No comments:

So this time I feel really special. I got a call from a professor at Ole Miss last night, and he told me that I was the "mac-mommy" of potential grad students. So now I have a tough decision to make! Ole Miss is giving me the best deal so far, but I'm definitely going to have to visit these schools to really make my mind up. Fun times!

I am totally flabbergasted by this whole thing for the following reasons:
1. I didn't get into Ole Miss last year. In fact, I faced a lot of defeat with my grad apps in '08, and I was pretty down on myself. But now, apparently, I'm being recruited by a grad school, which rarely happens to anyone. (freaking awesome).
2. I didn't get a letter. I got a freaking call. At 9:00pm on a Tuesday night.
3. I have to make the decision quickly (the deadline they gave me was April 1st), so I'm really doing some thorough, in-depth thinking about each school.

The "1/2" part of this whole thing comes from my potential admission into the other program at Ole Miss: Southern Studies. I haven't officially received anything from them, but I'm hoping to get in to that program--it sounds so neat!

Readers, do not misunderstand this post to think I'm complaining about these decisions! I have never felt more rewarded, grateful, and delightfully astonished than I do right now! Incredible.
Posted by hamblha at 9:48 PM 1 comment:

I got a letter from Emory yesterday that began, "We regret to....". Ah, oh well! It seems to be a trend that the "Southern Ivy Leagues" that I applied to aren't accepting applications from people who have the same first and last initial (HAH!). Initialists.

Thomas and I proceeded to call them the "Southern Kudzu League" and "Southern Poison Ivy League" schools. Hey--that's your alma mater you're talking about, bud.

So now I'm waiting to hear from Georgia (who apparently already sent their letters out last week...geez!), Ole Miss (Southern Studies and English), and LSU. Tick, tock, tick, tock...
Posted by hamblha at 10:17 AM 1 comment:

Here are the pictures (and video) from the Predators game that I promised. One of these days I'll post a "fight song" blog, since I've found most fight songs to be either really fun or really weird.


Here's the best picture from our view: 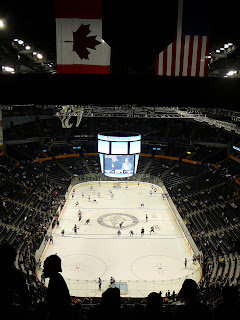 Sorry Davidson fans, but I didn't have enough battery on my camera to record the fight song (which was pretty ordinary, but I would have liked to record them singing/playing "Sweet Caroline" *bum bum bum*). Here are some pictures though: 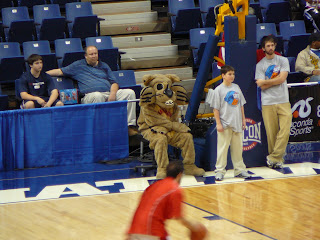 This is the Davidson Wildcat. Sorry if I offend anyone, but I must say that this mascot fails to inspire any fear, power, intimidation, or any other competitive emotions. It looks like a catfish with buck teeth and cheek flaps that connect its whiskers! Mr. Wildcat inspired giggles if nothing else. If you look to the right of the catfish, you'll see what the shirt I caught looks like. (Yes, the man shooting shirts out of his giant powerade t-shirt cannon shot one straight at me!) On the back is the Powerade logo, and the size is XL. It comes down to my knees. 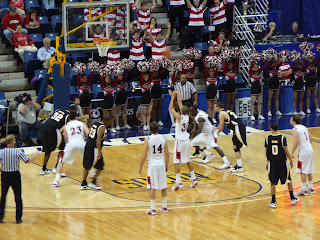 Curry shoots a free throw. He scored 43 points that game! 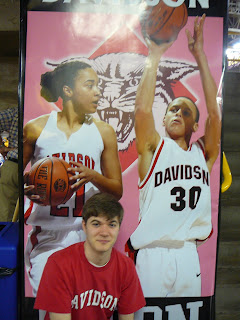 Here's Thomas with a Davidson basketball banner. They had one of each team in the Southern Conference, but seeing as we were there rooting for this one team, we didn't take pictures of the other banners.

I just found out that South Carolina (Danielle, answer your phone!!) is giving me about the same deal at UTK (tuition scholarships and GTA stipend)--that makes 2/5 so far that have opened their admissions doors in my favor. Not bad, eh?

I love that the admissions letter says they are offering me "substantial tuition abatements." I assume that that means "most," and I also assume that there will be out-of-state $$ to be paid. They gave me a contact number, so come Monday, I'll figure out what they actually mean by substantial.

Five down, five to go, and a choice to make. I think I'll use this evening to celebrate that!
Posted by hamblha at 6:02 PM 1 comment:

No #3 is from Vanderbilt. I was actually hoping to get in there, but seeing as I've got a sweet option in my pocket, I'll be swell.
Posted by hamblha at 12:10 PM No comments:

What a fabulous weekend that was! I'm going to try not to cover everything in detail because that would make for a LONG read and I feel like I should leave some things for Thomas to write about in his blog. I'll just cover some highlights.

Friday:
I had a great reason to leave work early because friend Anna and friend Kyle rolled on in around 3:00. (Thanks for that, guys!) Our evening consisted of the following:
1. Throwing darts at Vanderbilt's campus for being weird to Kyle
2. Being cold
3. Eating SATCO tacos
4. Playing an abbreviated version of Trivial Pursuit
5. Roaming around downtown before settling on a pub on 2nd street for a refreshment

Saturday:
Anna and I made silver dollar pancakes and coffee for breakfast. Then we met the dudes for lunch and to flit around Nashville for some tourist action (look for photos in a future post). Back to Thomas' for a quick nap, then downtown to eat. To sushi enthusiasts: Ichiban on 2nd street is fast AND mega-tasty.

After eating, we parted ways, and Thomas and I went to the hockey game, Nashville Predators vs. Detriot Red Wings. It was SO much fun! For brevity's sake, I will have to sum up the evening by saying, "ba dum bum bah da-da-da- dum HEY! YOU SUCK!" This was the "fight song" (really the latter half I guess--after every goal, they played Tim McGraw's "I Like It, I Love It" meshed with that generic fight song where people usually say "HEY, Go ____!"). It was a rowdy, eye-widening, and hilarious experience. I constantly asked myself, "Did they just do that?" After the hockey game, we blazed the snowy streets and reuinted with our pals at Robert's Western World, a honky tonk bar on Broadway, for beers and people-watching.

Sunday:
After an AWESOME brunch at Mad Donna's, Anna and Kyle left us for the "other" capitol city. My parents were driving through town also, so Brian, Thomas, and I met them for dessert afterwards, and I got to nuzzle Gigi for a few minutes. Sigh. What a good dog. Anyway, to friends far and wide, come visit us! And to Anna and Kyle, we had so much fun!
Posted by hamblha at 9:10 AM No comments:

She sho am crazy